A potentiometer is a simple knob with three pins (from left to right: ground, output and input) that serves as a voltage divider for an electronic source. A common example of this is the volume knob on a radio.

This tutorial will show you how to use the principals of a potentiometer with your Arduino board.

When the knob of potentiometer is turned, the amount of resistance is changed. In this example, the change in resistance is relative to the closeness of the pin to the source (5 volts) and the ground (0 volts).  In between, analogRead() returns a number between 0 and 1023 that is proportional to the amount of voltage being applied to the pin. The Arduino code in this tutorial will read the output of potentiometer and light the LED on the breadboard. The code has a delay set to the output of the potentiometer, allowing the user to visualize the output through the LED delay. For example, a reading close to 0 will rapidly blink the LED while a reading closer to 5V will lead to a longer LED delay. 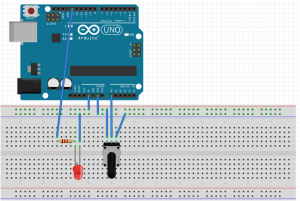 The Arduino Uno is the perfect hobbyist arduino board.